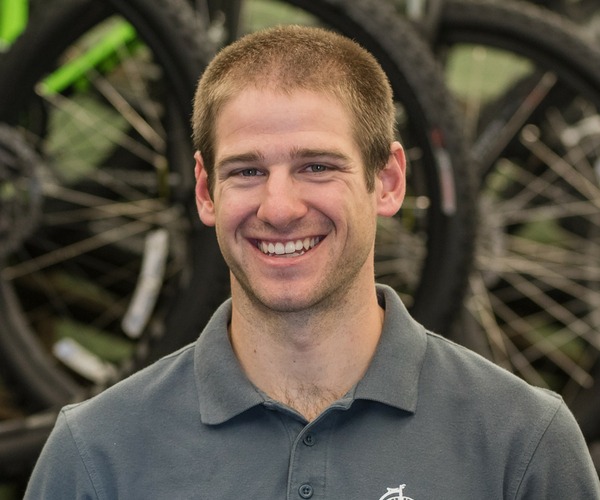 Kevin wears many hats at the Bicycle Barn (or is it helmets?). To offer the best products and services, he keeps tabs on the quickly changing cycling technology. From frame designs to electronic shifting to rider apparel and protection, he loves learning and sharing his knowledge.

Kevin became an avid cyclist when he joined the team in 2005. In 2011, he joined the Bicycle Barn full-time and doubled down on the road racing scene. Eventually, he added cross country and cyclocross racing. He says the best part of racing is the people you meet along the way.

When he’s not racing, training, or just smiling on his bike, you’ll catch him chasing his three kids around the store. He loves towing his kids around town and watching them find their own cycling legs.

“The cycling industry comes with a special kind of community,” Kevin says. “The focus is on fun and the outdoors. It doesn’t matter what level you’re at, we all get to play. It doesn’t matter where you come from or where you’ve been. When we sit behind the handlebars we’re all just a bunch of kids looking to have fun.”

In 2016, Kevin won the Tour of Walla Walla Stage race as a Category 3 racer. In the last ten miles the hill climbs kept coming, but he kept pushing. He skillfully (and painfully) chased down two breakaway riders, and won with a sprint to the finish!

Meet the rest of the team